It’s been 47 years since Jordan purchased land in Sonoma County. Last week, that changed. Jordan Winery is excited to announce the purchase of Meola Vineyard in Alexander Valley, just north of the town of Geyserville. This marks the first time that Jordan has purchased land since the acquisition of the 1,200-acre Jordan Estate in 1974. The property totals almost 45 acres with nearly 29 acres planted to cabernet sauvignon, and the purchase price was not disclosed.

“We have been looking to purchase more vineyard land for a very long time,” said John Jordan, chief executive officer of Jordan Vineyard & Winery, who acquired the winery from his father in 2007. “We have kicked the proverbial tires on a few properties and didn’t make any offers because we weren’t confident that those vineyards would produce grapes worthy of the Jordan master blend. This one is guaranteed and aligns with our focus on making the best cabernet sauvignon in our house style from a combination of estate and grower vineyards.” Owned by Mario Meola, who purchased the land in 1994, Meola Vineyard has been farmed with mostly organic principles to produce fruit-forward, subtly oaked wines like those he made growing up in southern Italy. Meola’s focus on growing grapes for European-style wines, as well as his well-drained, gravelly soils, drew Jordan to the property. Jordan’s Director of Agricultural Operations Brent Young will oversee farming of the vineyard for the 2021 vintage, which was planted from 1989 to 1994 to clone 8 cabernet sauvignon. According to Young, the vineyard will be replanted, but they want to evaluate quality, yield and vine health through at least one growing season, working closely with Winemaker Maggie Kruse and Grower Relations Manager Dana Grande, before deciding when to replant and what changes they may wish to make. Although Jordan had never purchased grapes from Meola and his wife, Bonnie, Kruse tasted barrel samples of Meola fruit from recent vintages and thought the fruit profile and balanced tannins would work well for the Jordan house style. Conceived as an estate bottled winery modeled after First Growth Bordeaux, Jordan has evolved its grape sourcing philosophy over the last three decades. The first shift began in the mid-1990s when phylloxera struck its first estate vineyard—275 acres of land that was purchased in 1972 on the Alexander Valley floor. It was this defining moment that the Jordans decided to plant grapevines on Jordan Estate for the first time—a hilly, forested piece of land in southeastern Alexander Valley that is home to Jordan Winery and more than 1,000 acres of open space. From 1996 to 1999, a dozen vineyards totaling about 130 acres were thoughtfully planted on hillsides surrounded by woodlands. While the new estate grapevines were taking root, Jordan worked with grapegrowers throughout Alexander Valley for its flagship wine, Jordan Cabernet Sauvignon, perennially ranked at the top of the Wine & Spirits Restaurant Poll.

The second shift began in the mid-2000s, when John Jordan took the helm. Long-time winemaker Rob Davis, who retired in 2019, was so taken by the intense black fruits and silky tannins found in the growers’ grapes from vineyards east of Geyserville that he wanted to continue making Jordan from a blend of grower and estate vineyard blocks even after the Jordan Estate’s newly planted grapevines began to bear fruit. Jordan gave Davis the green light to source grapes from any vineyard that would achieve Jordan’s fruit-forward, silky style—as long as the wine remained a cabernet sauvignon from Alexander Valley. At the time, Jordan Cabernet Sauvignon was produced from about 60 percent grower fruit and 40 percent estate, and even as John Jordan began reinvesting in his own vineyards, they continued to struggle to match the fruit intensity and tannin profile of the growers’ fruit. By 2011, Jordan Cabernet Sauvignon was made with just eight percent estate grapes. In 2012, Jordan sold its original valley floor vineyard, whose grapes had not earned a place inside a bottle of Jordan since 2009. When red blotch disease began to spread in Napa and Sonoma counties a decade ago, another pivotal shift occurred. The Jordan Estate vineyards had been suffering from the disease, possibly as early as in 2008, and in 2016, Director of Agricultural Operations Brent Young informed John Jordan that replanting every grapevine was the only chance to bring the grape quality and consistency to the level that winemakers Davis and Kruse desired. Since 2016, Jordan has been replanting all of its estate vineyards, roughly 125 acres over seven years. Changes in row orientation, varietal, density, clone and rootstock were made—and extensive soil preparations performed—to give this estate planting the best chance for success. A focus was also placed on growing Jordan Cabernet Sauvignon’s key blending grapes at Jordan Estate—merlot, petit verdot and malbec—and continuing to source most of the winery’s cabernet sauvignon grapes from growers, as growers are more reluctant to plant blenders due to the demand and price commanded by Alexander Valley cabernet sauvignon. The Jordan Estate vineyard replant will be complete in 2023, and the first estate grapes from the Chateau Block Vineyard earned a place in the 2020 Jordan Cabernet Sauvignon. 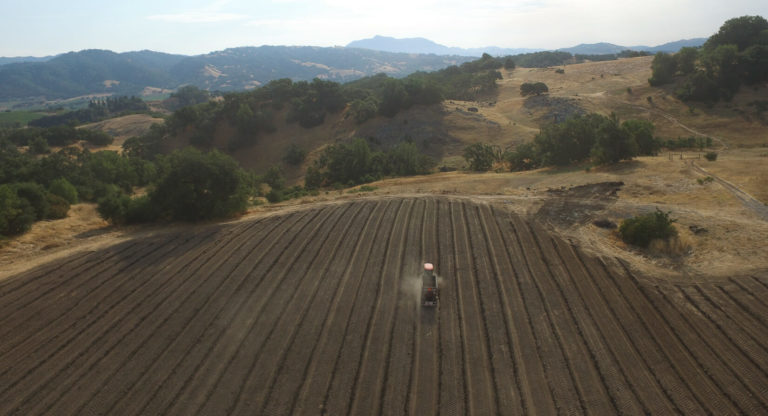 A Fresh Start: Why Jordan Winery is Replanting all Estate Vineyards Why We Rip: Preparing Vineyard Soil Before Planting Grapevines