They say good things come to those who wait, but the 2014 grape growing season in Sonoma County was the exception to this adage, when great things came early all year long. This Sonoma County grape harvest report gives an overview of the weather conditions that led to exceptional quality grapes and the flavors we expect to find in Jordan wines from the Russian River Valley and Alexander Valley appellations.

A moderate winter in January and February coupled with precision farming decisions, saw growth in the vineyards develop quickly, leading to an early budbreak in March. Our Russian River Valley Chardonnay vines were the first buds to break on March 14, 2014, signaling the official opening to our growing season. Our Alexander Valley Bordeaux varietals were quick to follow suit, showing their first signs of developing buds a week later. A warm, relatively dry spring through April and May meant swift flowering, hindered by only a few days of wet weather and a cold snap, which momentarily put Winemaker Rob Davis on edge about the potential for frost. Already low water tables and severe water restrictions would have prevented the use of sprinklers to protect against frost, which could have been disastrous at this pivotal time during the crop’s development. Luckily, warmer temperatures quickly returned, just in time for fruit set throughout May and early June. With a happy sigh of relief, Davis called it, “the most even flowering and fruit set I’ve seen in my career.” Warm days followed during veraison in July with Alexander Valley Cabernet Sauvignon growers seeing the first signs of color as early as July 7, 2014. Extremely dry weather continued throughout July and August, though consistent temperatures and very few excessive heat spikes yielded an even, well-developed crop. Two weeks of cool, foggy weather at the end of August temporarily slowed down this rapid growth cycle, before a heat wave over Labor Day weekend kicked ripening back into gear. The result of this overall accelerated growing season meant that harvest came early when we picked our first grapes on Tuesday, September 2, 2014, about 7 to 10 days earlier than in years past.

Amidst this excessively dry growing season, a new law passed in California on September 16, 2014, limiting underground aquifer water use by both commercial and residential consumers. Despite the limited water consumption rate of premium wine grapes, at approximately 6 inches of water per acre on an annual basis, this new legislation will have tremendous implications for our vineyards, our growers and the entire wine agricultural community in Sonoma County. Restricted access to ground water will cause winegrowers to quickly face new irrigation challenges in order to maintain progressively drier vineyards, thanks to continued drought. As of October 1, this year’s growing season marks the fourth-driest in Sonoma County’s history with only 17.84 inches of rain, landing close behind the mere 9.3 inches recorded in 1977, the driest season to date, as noted in our previous drought post.

In an effort to mitigate the long-term effects of these continued dry conditions in our vineyards, we have been seeking new and innovative ways to best manage our water use. With the help of modern technology, Ranch Manager Brent Young has installed small devices amongst the vines called Evapotranspiration transmitters to track specific vineyards’ water consumption. Created by Tule Technologies, these ET devices are attached to irrigation drip-lines and record how much water the plants actually consume versus how much water is applied to vineyard rows. Individual vineyard block data is then calculated and transmitted to Young, arming him with information on when and how often to water. Throughout the vintage, this technology also allows us to track and understand changes from year to year in the vines’ water consumption rate, yielding valuable data that allows us to truly pinpoint where best to utilize our precious water resources. Though drought challenges and concerns still dominate the conversation both on our property and amongst our growers, the unanimous sentiment for the 2014 vintage was that our precise canopy management practices and overall uniform seasonal temperatures allowed our vines to stay healthy despite Mother Nature’s lack of precipitation. The little rain that did fall came at precisely the right time, with 6 inches right before budbreak, bringing cherished water to otherwise parched vines. Thanks to a blend of our pruning practices, meticulous farming decisions and consistent temperatures, we managed to overcome one of the driest growing seasons on record relatively unscathed. Under the watchful eye of Davis, superior fruit selection always means picking at exactly the time when all of the following elements are aligned: integrated flavors, defined tannic structure, well-developed skin color and perfectly balanced brix and acid levels. In order best decide a picking schedule, Davis directs the fruit sampling from each vineyard to be evaluated under a series of rigorous protocols to determine optimal ripeness. Year after year, this focused attention to quality and timing ensures that each cluster that arrives at the winery is at its very best. Our 2014 harvest was no exception to this rule and once individual vineyards were ready to pick, energy shifted into high gear as many of both our red and white vineyards hit prime sugar levels at the same time. Consistently, we aim for slightly lower brix than many California winemakers, selecting to pick at approximately 24 brix for our Bordeaux varietals and 23 brix for our Chardonnay grapes—ideal levels for our balanced, lower-alcohol house style as noted in last week’s harvest update. By the beginning of September, the race to pick was on, and atypical of vintages past, this year the first clusters to christen our hopper were Alexander Valley Merlot grapes, instead of our usual Russian River Valley Chardonnay first arrivals. This role reversal was the first time in 10 years that red grapes were picked before white. Early ripening set the pace for the rest of harvest, as we saw gondola after gondola of Alexander Valley Cabernet Sauvignon and Merlot grapes arrive just before our first night harvested Russian River Valley chardonnay grapes glided over the sorting table on Thursday, September 4, 2014. The weeks to follow proved fast and furious as our cellar team juggled the challenge of limited fermentation tank space explained Davis, “We have more grapes to pick than we have tanks!” By mid September, cooler weather and light rain hit the forecast and slowed down the picking schedule a bit, allowing the cellar team to open up tank space before the next wave of grapes arrived in late September. Fortunately the wet, humid weather was short lived and interspersed with cool drying winds, mitigating potential flavor dilution and mold and mildew concerns. Clusters looked and tasted ideal with the purity of clean fruit flavors and elevated intensity that make for a dream vintage. Flavors of rich blackberry and cassis stood out beautifully in preliminary tank sample tastings, offering a sneak peek of delicious wines to come. Despite early season frost threats during budbreak, continued drought concerns, uncertain legislative ramifications, tank space challenges and rain during September, our 2014 harvest in Alexander Valley came to a close last Friday on October 3, 2014, and we are once again ecstatic with the quality of fruit from this season. Though a dry and somewhat challenging growing season, the payoff marked 2014 as a three-peat winner of exemplary fruit, following the back-to-back stellar vintages of both 2013 and 2012. As the leaves across the valley begin to turn and fall is officially upon us, we move our attention inside the cellar and keep our fingers crossed that Mother Nature will give us four-in-a-row string for 2015.

Check back in a few months to see how the 2014 Jordan Cabernet Sauvignon and 2014 Jordan Chardonnay are developing in the cellar. 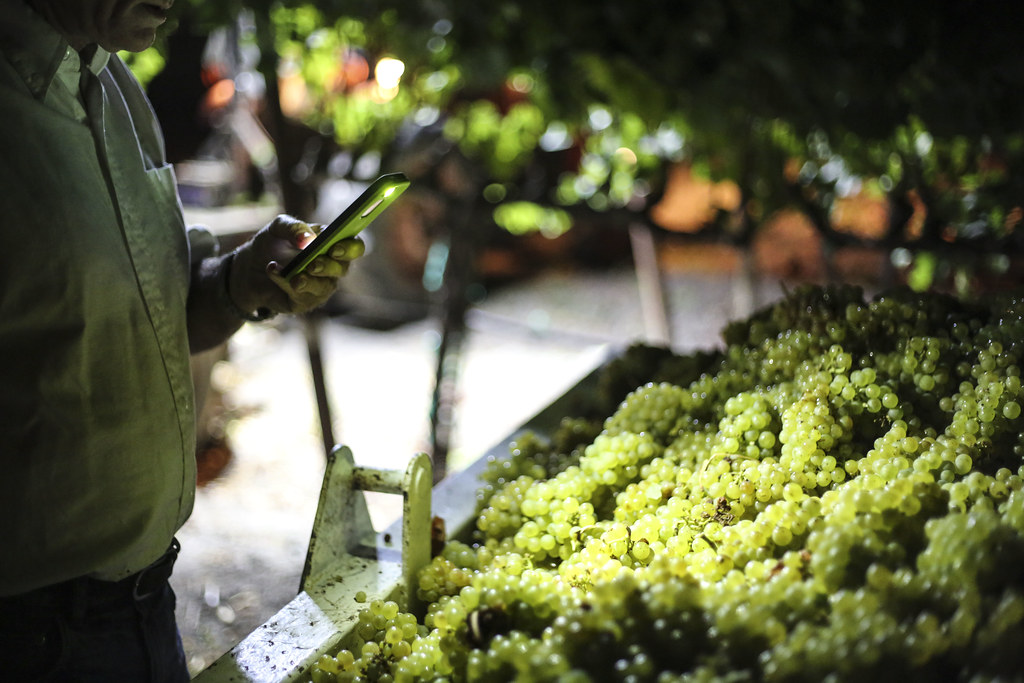