Mother Nature has a track record of rewarding grape farmers and winemakers the year after a challenging vintage, and we were hoping grape harvest history would repeat itself with an incredible vintage in 2018 to follow the extremely difficult 2017. (She blessed us with one of the best wine vintages of my career in 2012 after 2011 brought a hard reminder that nature does have a cycle.) It’s remarkable how similar the 2018 vintage is to 2012. If you loved the wines from Napa and Sonoma from what’s been called the “vintage of the century,” get ready for the next contender of space in your wine cellar. Looking back over the last eight months since bud break in the vineyards, there are four key factors that led to a phenomenal wine vintage for Sonoma County grapes in 2018. Watch all my 2018 harvest update videos on Facebook.

After years of drought, hot summers and early harvests, 2018 was the first vintage in recent memory that returned to what I call the “old normal.” The entire 2018 growing season was 3-4 weeks later than recent vintages. 2018 reminded me more of classic vintages from the 1990s when winter stayed cool with just enough rainfall and bud break in the vineyards occurred at a more typical time in late March. This set the pace for the grape growing season to continue progressing at a somewhat late yet normal pace. Very little rain or wind during the May flowering period let to a generous but not excessive cluster count. August felt like the old days—very foggy, cool mornings where the sun didn’t peek through the marine layer until lunchtime. The only real weather concerns of the entire vintage was a heat spike in June during fruit set and a little rain in late September. Fortunately, all of the thin-skinned chardonnay grapes were picked for Jordan before the rain, and cabernet sauvignon was born with a raincoat. We actually prefer a little rain between the white and red grape harvests to cleanse the Bordeaux variety grapes. The weather was glorious throughout October with cool, foggy mornings and sunny days.

The Grapes Were Small in Size

When fruit set occurred in June, the 2018 crop looked average in size, and I called it an “average but not great” crop size in my first Facebook Live growing season report of the vintage. I even said that 2018 clusters weren’t going to be as full as 2012 or even 2016. But as summer progressed, the clusters kept filling out beautifully, and there were many more berries per cluster than usual. This is what happened in 2012 as well. The similarities I found with the 2012 vintage and 2018 vintage gave me impetus for using the 2012 cluster weights in assessing the crop level for 2018. It is always a big guess as to how many tons per acre a block of grapes will produce. Experience certainly helps, but grower and winemaker are still more often wrong than right with their crop estimates. 2018 was no exception. As the cool weather prevailed through much of the summer, the vines kept drinking up the water from the irrigation and gleefully putting it in the clusters. Cluster sizes in many grower’s blocks were at a record high. As the vintage continued to fill our tanks in the fermentation room, totals from each block came in with similar yields as 2012. One grower of note set a record for his block at almost twice the normal yield.

2018 Will Be Remembered as the Ultimate Hang-Time Vintage

As previously mentioned, August was quite cool, and the heat spikes that the end of summer usually delivers never arrived in Sonoma. The days had such long, cool mornings and moderately warm afternoons in September that we called off all Jordan Chardonnay picks, giving the grapes increased time to hang and develop more intense flavors. With no threat of rain in the forecast in early or mid-September, winemakers had the luxury of letting all the grapes further mature as the varietal aroma, mid palate and depth of fruit concentrated. The gorgeous weather continued in October, when winemakers are usually worrying about fall rains and the vines beginning to shut down for the season. At the same time pumpkins were being harvested as Halloween décor, winemakers were able to work at a more relaxing pace, let fermentations progress naturally and wait to pick the grapes at just the right moment. This allowed the smaller berries of 2018 to develop a very intense level of dark fruit flavors and mature tannins in the red wine grapes and very bright, apple flavors in the chardonnay grapes. 2018 was the first vintage since 2010 that we were still harvesting grapes the morning of the Jordan Halloween party (October 20).

Both winegrower and winemaker are content with a bountiful harvest, but the winemaker alone is only content when the bountiful harvest means beautiful aromas, rich flavors and deep fruit character. We were both all smiles in September when the 2018 grape harvest began. It’s very rare that both of these things happen in concert—there’s usually some sort of issue with a little rain or a heat spike—but 2018, like 2012, is one of those phenomenal, special vintages were plentiful is the defining descriptor—lots of beautiful grapes with tremendous flavor concentration in the berries. Even though the berries were smaller, the weight of the clusters was record-breaking for cabernet sauvignon—about 0.4 pounds compared to the typical 0.25 to 0.30 pound per cluster of grapes. But the depth of flavor wasn’t impacted at all from the copious cluster weights. The blackberry and cassis flavors in the cabernet sauvignon and merlot grapes are exceptional, and the natural grape tannins were ideal. Winemaking and grape growing are earth sciences, and we humbly yield to the variable nature of each vintage. After a difficult 2017 that was out of balance with excessive heat and small yields from every grower, we feel like we all deserved a generous harvest like 2018.

As the last tank is pressed, we sit back in our easy chair and start to doze off until the next harvest. Just kidding. With the “barn” full of race horses, our winemaking team will begin assembling the 2018 blend. Barrels from our friends in France begin to arrive and then we start the process of pumping out the 2017 vintage into barrels to make room for our new young child, the 2018. The cycle continues and the excitement of the new harvest inspires our senses as to how we will shape the new vintage to earn the name, Jordan. 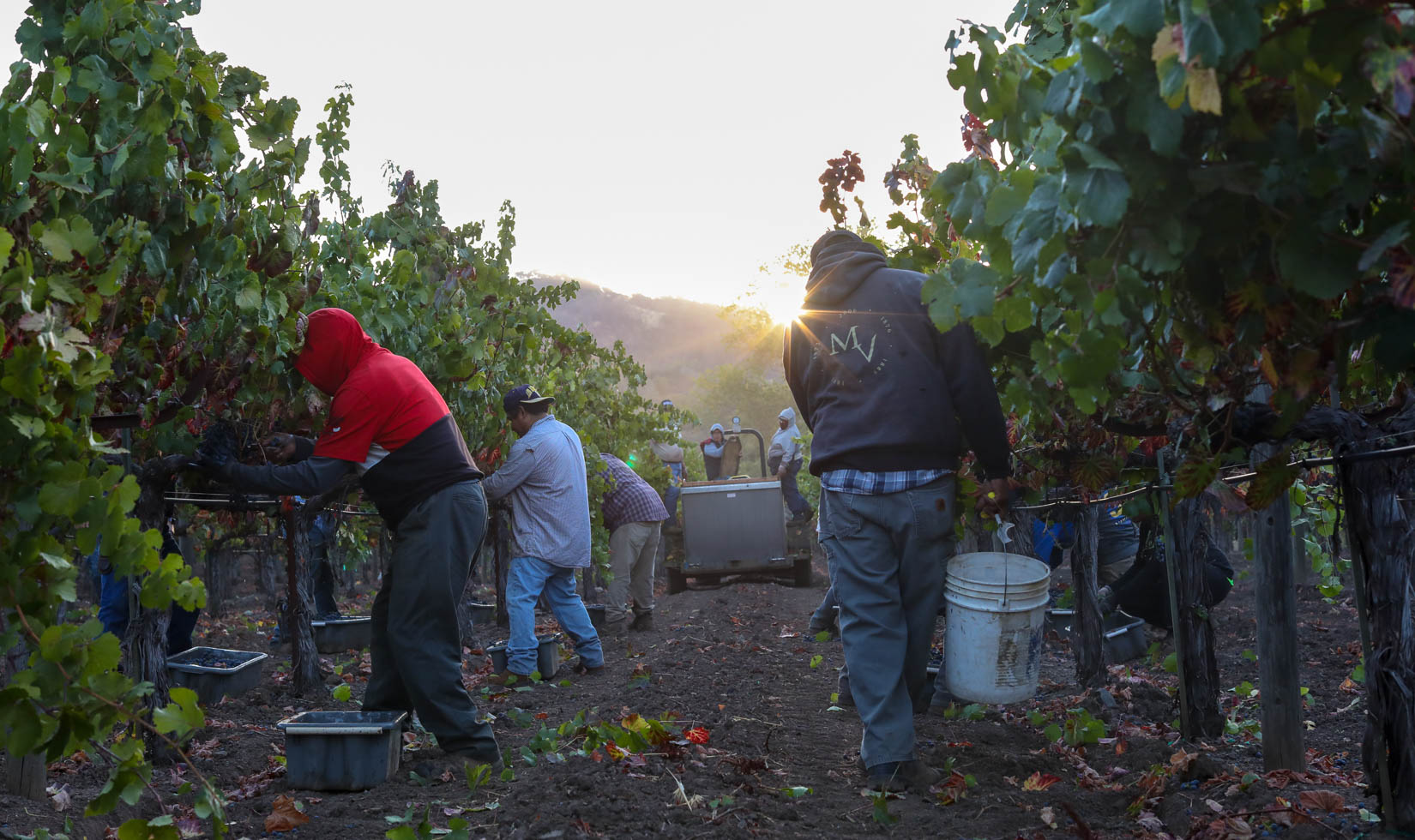