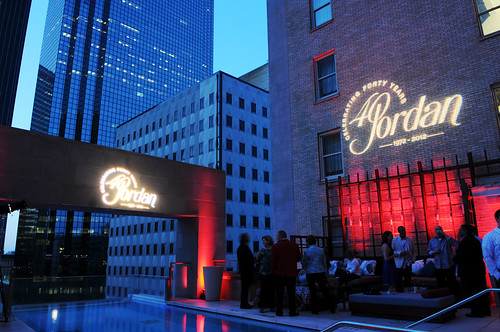 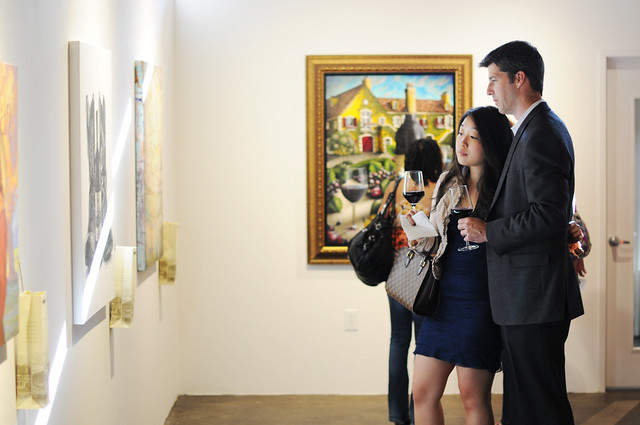 The grand award winner of the 4 on 4 Art Dallas was artist Todd Ford, an oil painting specialist whose style is similar to photorealism. Ford personally took his reference photo versus using stock photography. It took, “LOTS of trial and error with exposure and shutter speed,” Ford says. According to the artist, the “Jordan” tie-in is obvious; the “Dallas” tie-in is a little less so. “I included a portion of the Dallas skyline in the wine.” Ford won $5,000, and his work of art will be transformed into a limited-edition piece for Jordan’s loyal Dallas fan base.

First runner-up honors went to contemporary artist Douglas Winters, who considers his two great passions art and nature. “In this work, I endeavor to cultivate an intimate bond between Jordan Winery in Alexander Valley, California, and Dallas, Texas, by partnering natural and architectural details, color and definition of space, thus uniting the elements into an embracing relationship,” Winters says. “The composition displaces the typical chateau on the wine bottle with the skyline of Dallas, Texas.  The chateau is then transformed into the distinguished focal point of the work. This arrangement ties the symbiotic relationship together by incorporating the Jordan wine bottle with the chimney of the chateau, as if they were one.” Winters was presented a check in the amount of $2,000.

Artist Leighton Autrey took home the second-runner up prize of $1,000. Twenty-seven-year-old Autrey is a graffiti-based artist who was recruited to play Major League Baseball but his mother’s battle with skin cancer steered him toward an artistic passion closer to home. Autrey brought his urban technics within the undertones of his painting. For the competition, he chose to focus on a more poster-like composition and created a “WOW” effect with the size of his work, a 48”x 60” acrylic on canvas. His Dallas skyline was implemented into a “pouring of the wine effect” over his graffiti undertones in a hot pink, sophisticated, final masterpiece.

Patrons got to vote for their favorites as well. The People’s Choice went to Steve Hamilton, a 27-year-old artist who used an intricate spray paint and stencil technique to make a stunning black-and-white painting featuring quintessential cowboy boots and a bottle of Jordan Cabernet Sauvignon. 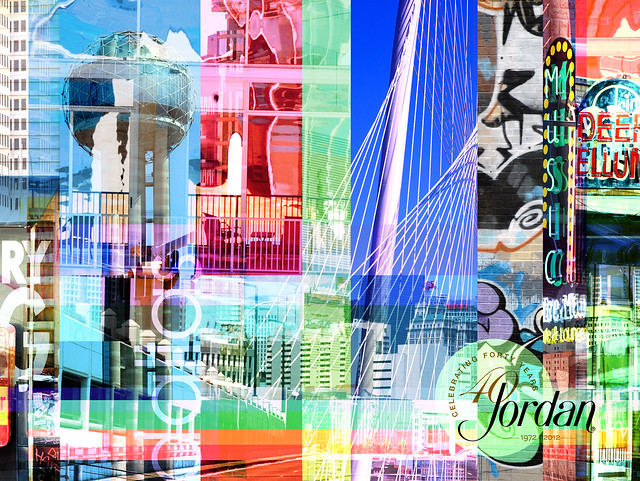 At the 4 on 4 Dallas Top 20 event, RISING Gallery worked with the artists to set a price of $950 for any work of art purchased the evening of the event. John Jordan and his staff, who said they were “blown away” by the talent in Dallas, personally purchased four paintings themselves. The remaining artwork from the show will be available for purchase at the event price through April 30. For more information, please email Bryan or Taber Wetz at info@risinggallery.com or call 214-559-4158.

On April 25, 25 customers, distributors, media and friends retreated to The Joule Hotel penthouse suite for retrospective wine tasting of Jordan Cabernet Sauvignon hosted by Winemaker Rob Davis and CEO John Jordan. Davis, who has crafted every vintage of Jordan, engaged guests with his vivid descriptions of each vintage (inaugural 1976, 1981, 1998, 1999, 2002, a 2005 super blend never released to public, 2008)—most bottles pulled from John Jordan’s private cellar. 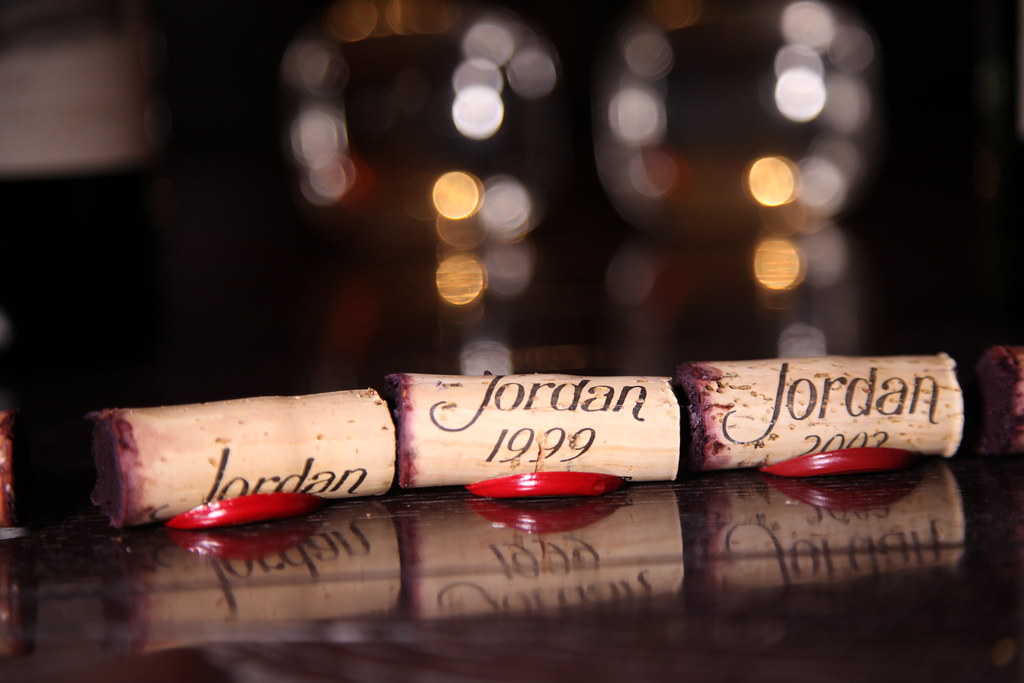 The third and final component was an exclusive poolside cocktail party at the uber-chic Poule at The Joule, also held on April 25. Nearly 100 guests mingled as they sipped on Jordan wines, including a six-liter bottle of 1979 Jordan Cabernet, a three-liter bottle of the 2001 vintage and previews of the 2010 Jordan Chardonnay and 2008 Jordan Cabernet, which release nationally on May 1. Guests indulged in delectable hors d’oeuvres by Charlie Palmer at The Joule, such as salmon tartare, smoked short rib fritters, lamb meatballs and melon skewers, as well as an array of Sonoma cheeses selected by Jordan’s Executive Chef Todd Knoll. John Jordan and the Jordan staff greeted party-goers, which comprised Glazers Distributors management, restaurateurs, retailers, sommeliers, media, Jordan Estate Rewards members and local movers-and-shakers. In addition, the winning artists were recognized again and displayed their works for party guests. 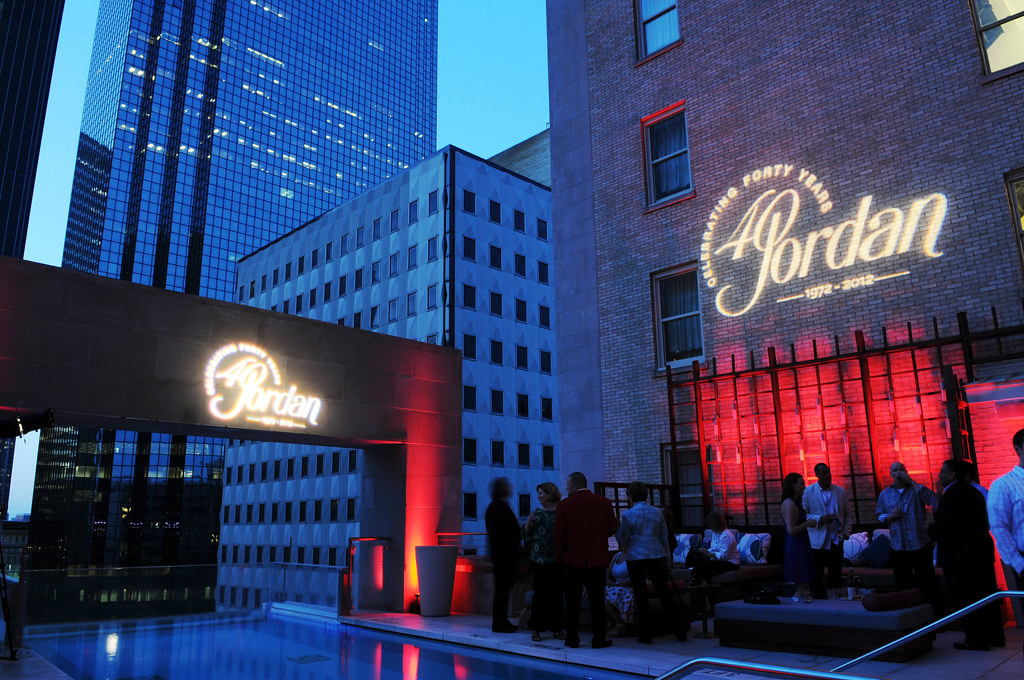 The grand finale of Jordan Winery’s two-month-long 40th anniversary celebration will be hosted at the winery in Healdsburg on June 2: Giving Back at Jordan, an unprecedented philanthropic event leveraging the Causes.com social giving platform and benefiting three Bay Area charities.