Nothing in life is a coincidence. I couldn’t help but think of the power of fate on Monday, August 24, when thirty guests turned out to celebrate Winemaker Rob Davis’s 40th harvest at Jordan Winery. Three months in the making, the entire event was a surprise that involved juggling dates and schedules of friends and colleagues who have known Rob for many decades of his wine career–baseball legends, barrel makers, cork suppliers, journalists, sommeliers, friends, his family and fellow winemakers.

When we selected August 24 as our surprise party, we knew it was the only day the San Francisco Giants (Rob’s team) weren’t playing right before harvest, so Bruce Bochy, Mike Krukow and Duane Kuiper could (hopefully) attend. Luckily, that date coincided with special guests already traveling to California from Portugal, France and New York. What we didn’t know is that this day would end up being the official start of harvest 2015 for Jordan. (Rob made his first picking decision about 72 hours before the start of the event.) The symbolism of the event–gathering thirty friends to toast to his 40th harvest a few hours after the first grapes arrived at the crush pad–made the celebration all the more memorable. (Watch our video messages compilation from friends, fans and celebrities.) Giants broadcasting team “Kruk and Kuip” were first on deck, roasting Rob with a series of funny forties. (See the list of highlights on Blake Gray’s blog.)

Over the course of two hours, coincidences soon became a common theme–the serendipity of it all unfolding as stories were told and storied bottles were poured–1977 Jordan Cabernet Sauvignon in six-liter format, Rob’s inaugural 1976 Jordan, 1994 Petrus, a Graham’s 40 Year Old Tawny hand-carried from Portugal and more. Here’s just a few of the surprising tales told:

Bruce Bochy, general manager of the San Francisco Giants, who became friends with Rob due to their shared love of baseball and wine, toasted Rob during the main course. He surprised guests by revealing that 2015 was also a special 40 for him–his 40th anniversary since signing his first contract to play Major League Baseball.

Daniel Baron, long-time friend of Rob and winemaker at Silver Oak, brought a special bottle of 2005 Château Magdelaine as a gift. (Jean-Claude Berrouet, who made wine at Château Petrus and Magdelaine for many years and worked with Daniel at Dominus Estate, was also in attendance.) Daniel had asked his assistant to pull a bottle from his cellar in Oakville, and he didn’t look closely at the bottle until just before the event. The label was streaked with wine stains. It was among the bottles spared from Silver Oak’s cellars during the historic earthquake that had struck Napa Valley exactly one year before: August 24, 2014.

Jean-Claude Berrouet, retired from Château Petrus and now consulting with Daniel at Twomey Cellars, shared the story of the first time he’d met Rob. It was 1981, and Rob had traveled to Bordeaux with Daniel, a fellow UC-Davis graduate. The three men had never met before, and as the story unfolded about the time they had spent together with Jean-Claude and Christian Moueix, the owner of Petrus, Jean-Claude realized that his wife had been pregnant during that trip with his son Jean-Francois–who was sitting across the Jordan dining room–and it was Jean-Francois’s first time to visit Rob at Jordan.

Mario Pinto of Corval Corks, who oversees cork sourcing for Jordan wines in Portugal, brought three very thoughtful wines to celebrate the occasion: the 4o Year Port to share with all the guests to commemorate Rob’s 40th harvest, a 1954 Colheita (Rob’s birth year–and a very rare wine since 1954 was not a declared year for Port) and a 1976 Graham’s Malvedos (Rob’s first vintage at Jordan). He also shared the story of the time he came to America to visit his winemaker-customers, and experienced his first Vineman triathlon–cheering on a bloody-kneed, sweaty Rob as he crossed the finish line.

The afternoon of laughter and tears culminated with Jean-Jacques Nadalie of Nadalie Cooperage in France, who crafts many barrels for Jordan Cabernet Sauvignon. He flew to California specifically for the celebration to present Rob with a one-of-a-kind, French oak barrel he personally made–a process that took more than two years, from tree harvesting, seasoning and milling to assembly and shipping. Stay tuned for behind-the-scenes video on the making of this wine barrel.

Forty years on the same job at the same winery–such a milestone is rare in California winemaking. Paul Draper at Ridge has Rob beat by six years, but as one journalist who attended reported, Paul has passed most of his winemaking reins to assistants. Anyone who knows Rob can attest to his boundless energy and drive to work as long as his mentor, André Tchelistcheff, who retired at age 91. Though Rob has said his full Vineman triathlon days are over, we know his best vintages still lie ahead–many, many more of them. 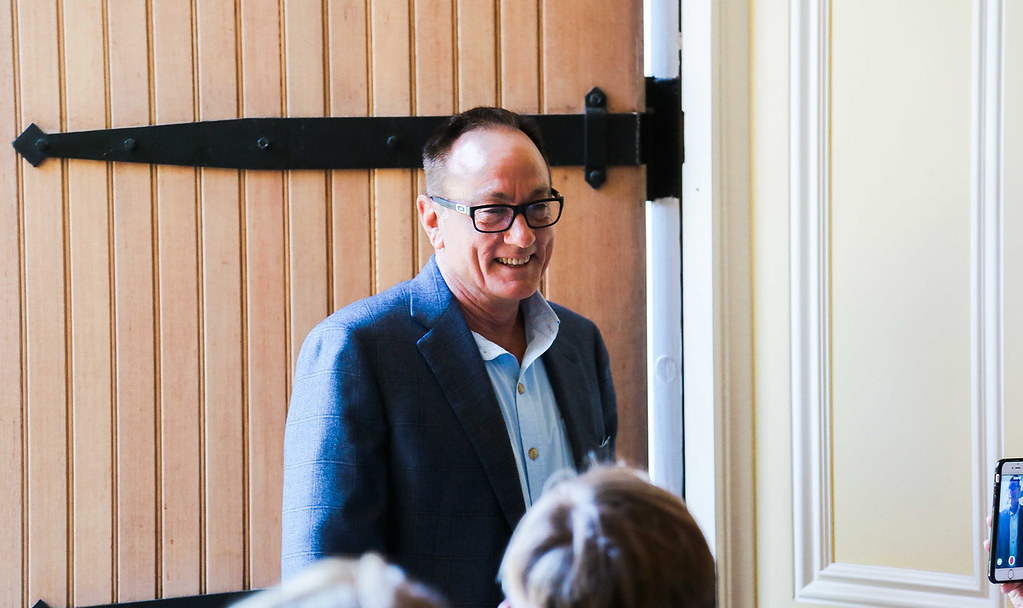